This tutorial introduces how to transmit images in real time via the Raspberry Pi.

The Raspberry Pi robot features the real-time video and OpenCV functions. There are many methods of transmitting videos captured by the Raspberry Pi camera via network in a real time manner, and this tutorial introduces an open source project following the MIT License on Github:

The project uses Flask and related dependencies which have been included in the installation scripts for the Adeept robot. You may need to install them if your Raspberry Pi has run the script before.

The OpenCV part will not be involved here; the tutorial only introduces how to view the image of the Raspberry Pi camera on other devices in real time. First, download the flask-video-streaming project. You can clone on Github or download on your computer and transfer to the Raspberry Pi, using the command on Raspberry Pi Command Line:

After flask-video-streaming is downloaded on the Raspberry Pi or transferred, run the file app.py in the project:

Pay attention not to run by the command "sudo python3 flask-video-streaming/app.py", or there will be an error of unfound *.jpeg file.

Open a web browser (Chrome for example) on a device on the same LAN of the Raspberry Pi, enter in the address bar the Raspberry Pi's IP address and the video stream port number ":5000", as shown below:

Then you can view the webpage created by the Raspberry Pi on your mobile or computer. Note that by default, images of 3 numbers 1, 2, and 3 will loop instead of anything from the Raspberry Pi.

If you can log into the page and 1, 2, and 3 images loop display, it indicates the flask program runs well. Then you can change the file app.py to display videos collected by the Raspberry Pi's camera.

Here we use the nano built in Raspbian to open and edit the app.py. There's no need to edit in other IDEs as only commenting or uncommenting involved.

1. Uncomment the code after opening app.py:

3. At last, uncomment the code Camera imported from camera_pi by deleting "#" – pay attention to delete the space after "#".

5. Press CTRL+X to exit after editing. A prompt will be shown asking you whether to save to not. Type in Y and press Enter to save.

7. Open a web browser (here we use Chrome as an example) on a device on the same LAN of the Raspberry Pi, enter in the address bar the Raspberry Pi's IP address and the video stream port number ":5000", as shown below:

9. This function is based on the flask-video-streaming project from GitHub:

The OpenCV function is based on the flask-video-streaming project on GitHub; here we just changed the camera_opencv.py file for operations with OpenCV. 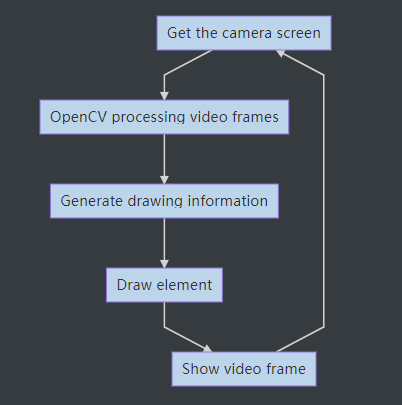 Process explanation: First, capture an image frame from the camera, analyze the frame with OpenCV, generate the information to be drawn, like the central position of the target or the text to be displayed on the screen, draw accordingly, and then display the image which has been processed and drawn on the webpage.

This whole process is inefficient as it needs to wait the OpenCV to implement the processing and display on the screen for each frame before starting the next frame processing. It may cause a stuck video transmission.

The process is as shown below: 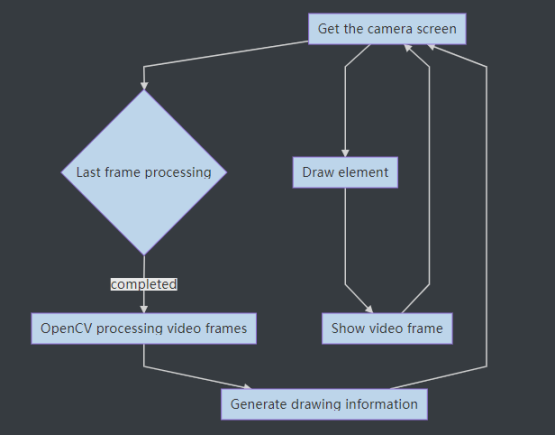 Process explanation: To increase frame rate, here we separate the analyzing of video frames from the collection-display process and run on background thread to generate image drawing information.

That's the code for multi-threaded OpenCV processing. In the subsequent part of introducing details of the OpenCV function, we will only explain the method of video frame processing with OpenCV and skip this part.

– First, create two .py files in a same folder of the Raspberry Pi (they are already included in the product download package for the Adeept Robot; refer to app.py and base_camera.py), with code as shown below:

When developing any function related with OpenCV in the following tutorial, you only need to include the respective camera_opencv.py file in the same folder with app.py and base_camera.py and run app.py in the Raspberry Pi command line.

The video display in real time by web controller is implemented based on the OpenCV function as mentioned above. A web controller is a web interface to control the robot product to perform various actions and it can be applied on any device that is able to run a browser, including PC, mobile phones, tablets, etc.

If you've completed all installations based on the instructional document, it will be quite easy to open a web controller.

l Check that your device is under the same LAN with the Raspberry Pi.

l If you terminate the Raspberry Pi auto-run program, you need to re-run the program, run the command:

l Open a web browser (recommended to use Chrome in case of any possible incompatibility with other browsers), enter the Raspberry Pi's IP address with the port :5000, for instance: 192.168.3.44:5000

Then the web controller will be loaded into the browser. 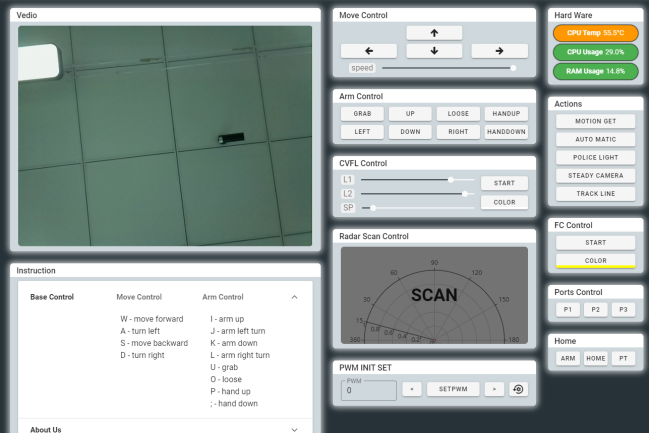 The video window on the top left corner shows the images from the Raspberry Pi camera. Modules on the web controller may vary from products. More details of the modules will be explained subsequently.

Lesson 10 How to Take a Photo with Raspberry Pi